I always wondered about this:   (Original article )

The man who became famous overnight.

I am sure almost everyone here has seen this portrait before. 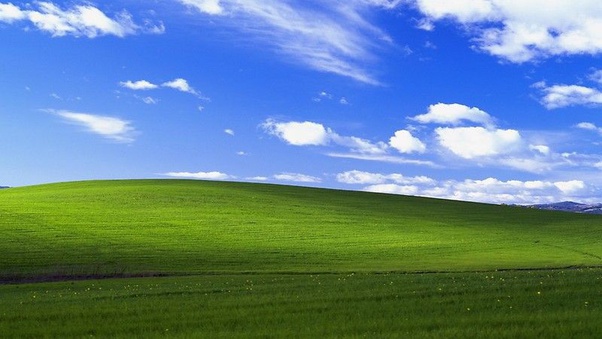 This is the default wallpaper of Windows XP.

This picture looks like a Photoshop’s work but no its 100% real with 0% editing.

Now, this is Charles O’rear. The man who clicked this picture. 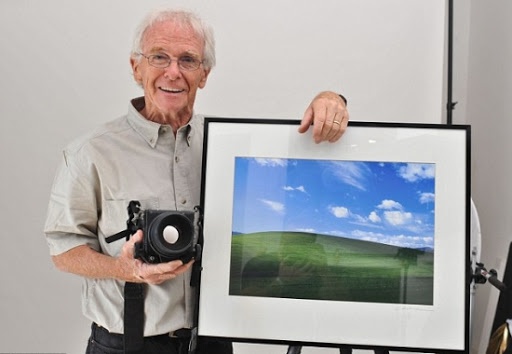 Charles was on his way to his girlfriend’s house and suddenly he saw a beautiful sunny hill.

He paused his car and clicked few pictures.

Later, he sold the picture to an advertising company as a stock photo.

Many years later, Microsoft found it. They agreed to license it from Charles, and made it the default background for Windows XP.

It is believed that this is most viewed picture ever. It’s been seen on roughly one billion computers.

And that’s how a guy pulled over on the side of a road and took the most viewed picture.

Yes, lucky are those who have a girlfriend.

I heard a story once of a surefire method of to make a million, fast.  I wanted to research if this was truth or fable, but decided against it.  For some reason I do not want to ruin the legend with heaps of stats and data.  Knowing what a statophile I am, I resisted the urge to fire up the Google machine and rather focus on finding the moral the story.  Oh, mon amis, this story is in full supply of morel.

I Imagine this story to take place in the late 50s, early 60s.  In America.  Why America?  Cos in my mind it flickers with the smoky sepia of a noir film of that era.  Was the economy in an upswing?   Or was it a time of uncertainty like exists in the world right now?  I do not recall the original tale giving details as to the where and when.  The details are only relevant insofar it colors the mien in my imagination. 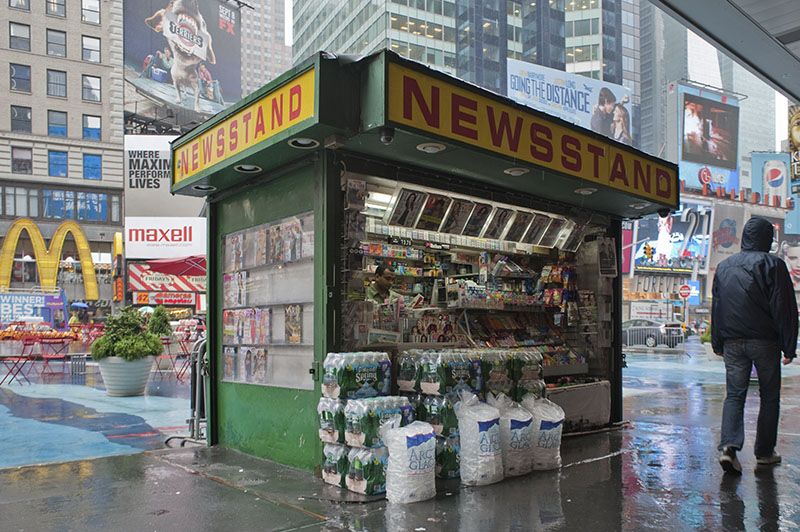 The story goes like this:  In a large city, probably New York, an unknown person took out a double page advertisement in the most popular newspaper of that era.    To do this is not cheap, but hey, it takes money to make money.   The heading of the advert read:

The print got smaller as the details unraveled.  Under the heading there was a paragraph of assurance.  Few words of inspiration in the second paragraph.  And toward the end, a call to action.

“Send a self-addressed envelope with five dollars to this P.O. Box and in 30 days the secret to becoming a millionaire will be revealed to you. “

30 Days went by.    The answer to the question was revealed in the form of many; not sure how many, self addressed envelopes that all arrived to their destinations on the very same day.  The reactions to the reveal could be placed in three categories.  1)  People that perceived it to be a gag.  This category had a spectrum ranging from some feeling that it was a delightful joke.  To others raging that it was done in very poor taste.  A substantial amount of people took it serious enough to gamble with the required five dollars, hoping for the best – more about them just now.  The third category, a minority consisting of curious investors, journalist and academics who became obsessed with the outcome of this experiment.

So this is how it happened.

Without exception the self-addressed envelopes that once was accompanied with a five dollar bill was returned with a single page letter in its stead.  The letterhead looked official and the first paragraph had polite words thanking the recipient for the leap of faith.  Be it only a little five dollar leap.

In the second paragraph the letter got right down to brass tax.

How to make a million fast.  The instructions are as follow.  Keep in mind that it takes money to make money.  Also that timing and execution will contribute to the measure of success.  The most surefire method of becoming a millionaire is to procure the funds; either by loan or by one’s own wealth, a sufficient amount to take out a double page advertisement in a reputable newspaper. One with a very high circulation number. This works especially will in a very large city…..

P.T Barnum was reported to say: There is a sucker born every minute.

Neither am I looking up this quote by Mr. Barnum.   It would not surprise me much at all if this was a stunt originally pulled by Barnum himself.

Obviously, this can only work once.  Or can it?  Remember the third category?  The people that became obsessed with the effectiveness of this stunt?  They that wanted to know if the mysterious advert raised a million.  Maybe ten times that much?  Maybe only a tenth.  Would you be at all  surprised to learn that many tried the same stunt since?

I assure you many have tried!  Maybe disguised in different forms, but it happens more than you know.

Calling BS on the whole thing.

In its bassist version there are the unsolicited emails advising you on how to make your website perform better in search results.  I’ll sooner believe that I had an rich Nigerian uncle who met his demise, than taking advice from a bold-type email from a Yahoo address.  Listen,  I don’t want to be that guy that calls bullshit on it every time.  If this story is true; and if indeed it worked, I’m supper stoked for the guy who pulled it off.  He took a risk in a creative way.  He stuck his head out.  Had some skin in the game.   I, myself would not for a second have given any thought to sending five dollars of my own money to whoever this guy was.  Never the less, I’m tipping my hat to him.   Let me run some real life examples pass you of how this happens every single day on  small and much larger scale.

Starting with my pet peeve.  SMM.  That is, Social Media Marketing.  Yes, I’m going to step on some toes here, but like Ricky Gervais, I too, don’t care anymore.     (I’ll spare the “couches” off all stripes  for another day.)

The only people that makes any money in the mud wrestling pool known as SMM is those that does workshops on the topic.  Seriously?   If you have to pay for a seminar or workshop to learn how to make money like the guy who is presenting the workshop….  Am I the only one here that perceive the emperor to but naked?

In the History Channel documentary series, Valley of the Boom   an equally fantastical tale is spun.  The long and short of it was that a con-man named David Kim Stanley tried to launch the pre-cursor to Youtube in the day of the 56k dial-up modem.    Read about the madness here in this Wired Article.  Also check out the series if you can get hold of it.

Not surprisingly that  the lure of this rare animal known as the Silicon Valley Unicorn, is so mesmerizing that all disbelieve is suspended, probably on a daily basis, in the Valley of Silicon and dreams.

Such is the case of Elizabeth Holmes of which was made the documentary named:    The Inventor: Out for Blood in Silicon Valley  . People sooooo wanted to believe.   Intelligent people begging to come in at ground level with that five dollar clutched in hand.   “Knowing” that the right amount of entrepreneurship, creativity and good fortune can turn every five dollar bill into a million dollars.   So they joined the cult and drank the Coolaid without any thought or hesitation.

It’s getting late so I’m going to Google and grab the 1st result on “What is the dartboard test?”  This test is perhaps testimony that there exist more randomness than method in this world.

Again, it’s late, so I will leave you to find your own moral to the stories you heard here tonight. It was one of those days, where I spoke to a potential partner about competitive advantage.  It was hard to get a read on the person, like so many others.  Jobs said people don’t know what they want, you have to show them.  But some people do not know what they want even after you show them.   Jobs, people know they want a thing; a tangible thing, when they see it, but they struggle with abstract things.

Okay, that headline was false.  I did not really deeply research this phenomenon that I come to call the Rowe Effect.  But, I’ve kept an eye on it for a few decades.  Uber is an abstract concept that was sufficiently executed and then grew into the thing that we know it as today.  Few people know that Uber was not a “taxi service” as such, but an app for people to carpool.  Through need and supply, pivots and incrementalism, the Uber Original became  Uber Today.  Companies like Lyft, on the other hand, saw during  the early stages of Uber that there is an need for a crowd sourced taxi service, if one can label it as such.  Lyft never had to go through the metamorphosis.

I have to remind myself that this is a media/video blog and not rant about my frustrations swimming up-stream.  Video on the Internet (VOI) are solidly part of our daily info or entertainment diet.  But unlike the old day, when you got your info and entertainment over a square box, there are in modernity none of the  gate keepers in the form of broadcast bosses.  Or is there?

How no one can see this is beyond me.  The modern gatekeeper is not the whimfull TV boss; it is a highly logical algorithm that gets its marching orders from a democratic consensus.  This is a mouthful, but let me say it in another way:  what you see in your feed is what everyone wants to see in their feed.  To get out of that track is very hard.  Also for said track to change is a slow and difficult process.  If no one is discovering you it will be hard to be discovered.  If you already highly ranked, you will rank more highly.   This is obvious but what is less apparent is that a lot of great content will never hit your eyeballs because there is a curation problem which the old days of TV did not have.  Sure the old days had other issues, but this issue is an elephant in the room, at least for me.

Let Me Spell It Out

Content producers, technicians, service providers et-all should self-unionize and self-curate.    They should form teams, groups, circles; networks where their efforts can be co-ordained.  Things like knowledge, skills, and even cost of marketing can be co-opted. Burden and profits are shared.   It comes down to game-theory of which I wrote earlier.